For centuries the mystery of Oak Island has haunted the minds of treasure seekers, American presidents and laypeople alike. Ironically, no one has ever been able to work out just what the mystery is, let alone what the treasure is. Its association with Knights Templar secrets or treasures – and of course the Holy Grail – has been long running, so I guess it is about time that someone explain just what it is.

Journal of the Royal Astronomical Society of Canada says: The Quest To Regain Paradise: “…mankind’s quest to regain the lost knowledge of the ancients.” 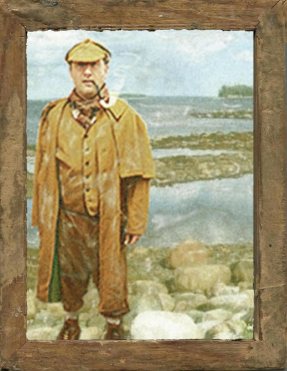 Buy The Quest To Regain Paradise and live the mystery

To reveal for the first time the true nature of the secret, we first need to turn to another unresolved mystery that is linked to Oak Island and the search for the Holy Grail – that of the Shugborough Monument Code.  In short, there is a stone monument in the grounds at Shugborough Hall, England, that reputedly holds a code that will reveal the location of the Holy Grail. This code has notoriously eluded professional code-breakers, including a team from the legendary Bletchley Park. The stone monument contains a scene where a group of shepherds are pointing to a short Latin inscription that is contained on a mysterious tomb, as follows: ‘ET IN ARCADIA EGO’. 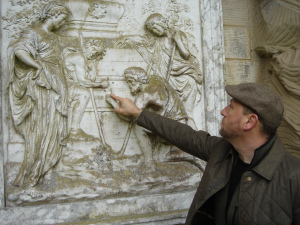 Translated from the Latin, this strange inscription, ‘ET IN ARCADIA EGO’, reads: ‘AND I IN ARCADIA’. Of course, anyone with knowledge of the Oak Island mystery will know that the explorer Giovanni da Verrazzano applied the name ‘Arcadia’, on his 16th century map, to the area that encompasses Oak Island.

There is also one more essential connection between the Oak Island mystery and the Shugborough Monument Code that needs to be brought to light in order to reveal the extent of the secret; a connection that lies with the enigmatic, English figure famed for his secret codes and cyphers, Sir Francis Bacon, the once Grand Master of the Rosicrucian Order. Bacon played a leading role in establishing the British colonies in  north-eastern Canada, encompassing Oak Island; and the theory goes that he had something to do with the unknown treasure thought to be hidden on Oak Island. His connection with the Shugborough Monument Code, I will explain below.

Since my last book, ‘The Quest To Regained Paradise’, I have been allowed a certain freedom of access to the inner teachings and rituals of an old strand of Rosicrucians that exist as nine chapters across the globe, who meet biannually in York under the guise of The Thirty Nine Steps; its headquarters just to the south of Edinburgh. When I first made contact with one of its members, they showed me how to crack the Shugborough Monument Code and make, for the first time, the missing connection between Shugborough, Bacon, Arcadia and Oak Island. The following account of the background to the Shugborough Code and how to crack it can be found in the documents held by The Thirty Nine Steps at their headquarters, as follows:

“On his death bed in 1748, William Kent, the illustrious Yorkshire man, exquisite master of the Craft and keeper of the secrets of Solomon’s House, College of the Six Days’ Works, left Thomas Anson to ensure that Peter Scheemakers kept to the exact design of the Shepherd Monument at Shugborough. The instructions alongside Kent’s drawing were as follows: On the monument the Shepherds hands should be carved to highlight the letters of Bacon’s name to preserve the important connections to Newfoundland, where the two artefacts required to complete the quest to regain Paradise would be hidden for the prophetic conclusion in AD 2045. The carving should be such that, one of the shepherd’s thumbs be used to form the letter ‘B’, the tip of one finger to rest on the letter ‘N’ and another above the letter ‘C’. The letter ‘A’ should be framed between the hands to illustrate the deeper Arcadian link, and the letter ‘O’ should rest next to the knuckles.”

Of course the middle parts of the fingers are now somewhat degraded and bits missing, but it is quite obvious that the letters being highlighted on the Shugborough Monument are acting as an anagram for ‘Bacon’, the Rosicrucian Master.

Even though this is the first time the true nature of the Shugborough Monument Code has been released into the public domain, I think it is also important at this juncture to reveal the final essential connection of the mystery to the famous Rosslyn Grail Chapel, just south of Edinburgh. Due to my dealings with The Thirty Nine Steps, I have often been to the chapel as part of my investigations to solve the larger mystery surrounding the quest to regain Paradise. In short, the Rosslyn legend has it that Prince Henry Sinclair sailed to Oak Island, Arcadia, in 1398, to play a part in the preservation of the two artefacts – the treasure – surrounding the quest to regain Paradise. To commemorate this secret event the chapel authorities placed a carving on the back of a chair in the chapel, inscribed with the Sinclair coat of arms on a ship and the words ‘To Arcadia 1398’. 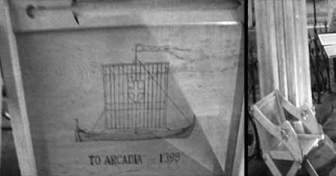 Of course, we have directly linked together and in effect resolved three of the greatest esoteric mysteries that have survived across the ages. All we have to do now is reveal what it all means, and more importantly explain what the treasure is…

Buy The Quest To Regain Paradise and live the mystery